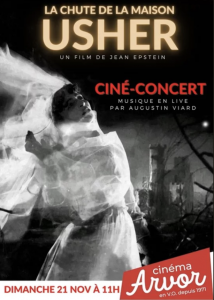 During lockdown Augustin Viard composed a soundtrack for the 1928 silent film “The Fall of the House of Usher” (La Chute de la Maison Usher) by legendary French filmmaker Jean Epstein. Augustin’s plan was to perform the soundtrack on the ondes Martenot live for a cinema screening. The Fall of the House of Usher based on the 1839 Gothic short story by Edgar Allan Poe was described as one of the most renowned of experimental silent films. This new score to accompany the film was designed as a true cinematic immersive experience. Augustin Viard speaking about the score said “the challenge was not simply to underline the action with an intricate soundtrack, but also to magnify Epstein’s most stunning visual scenes with the added poignancy of a live ondes Martenot performance.”

At the end of 2021 the soundtrack was premiered by Augustin in a cine-concert performance at the Arvor Cinema in Rennes, France. Myriam Issouf Ali, from France Bleu wrote “Augustin is the rising star of the ondes Martenot on the international stage”

This haunting film is particularly relevant for the ondes Martenot because it was released in 1928 the very year the instrument was invented by Maurice Martenot. In Augustin’s words “it’s a perfect match!” Augustin is now looking to bring this extraordinary work to wider audiences on the international stage. “Writing this soundtrack was a labour of love and reverence. I am looking forward to sharing this journey with future audiences”

Augustin is renowned for collaborating on a variety of award-winning film projects. In 2017 he played the ondes Martenot on the award-winning soundtrack of the international film “Loveless”. This film received the Prix du Jury du Festival du Cannes 2017 and the Cesar du meilleur film étranger (best foreign film) 2018. Also that year he composed the original music for the audio cinema film Le brasier Shelley with Warren Ellis starring Gaspard Ulliel, Warren Ellis and Marianne Faithful. This film was selected for the Festival du Nouveau Cinéma of Montréal competition 2018. Last year, Viard composed the original theme for “Earwig”, a full-length film directed by Lucile Hadzihalilovic, which won the Special Jury Prize at the San Sebastian International Film Festival. “Earwig” was also nominated at the 2021 BFI London Film Festival.

To watch the Trailer of the film watch“>HERE.