Samuel Oram studied at the Royal Birmingham Conservatoire, and the Royal College of Music. He was awarded a Dennis O’Neil Foundation Scholarhip to work with him at the Wales International Academy of Voice. He was a finalist in the London Song Competition and was the winner of the Herbert Howells Song Prize.

His operatic roles include Figaro Il barbiere di Siviglia, Belcore L’elisir d’Amore, Marcello La Bohème, Harlekin Ariadne auf Naxos, Nardo in Mozart’s La Finta Giardiniera, and Poeta in Rossini’s Il turco in Italia. He has performed with Longborough Festival Opera, Opera Holland Park, Opera North, The Grange Festival, Westminster Opera Company and Opera Holloway. He has sung and recorded the role of John in Joubert’s Jane Eyre with the English Symphony Orchestra and performed Gadshill in Holst’s At the Boar’s Head for Northern Opera Group. In 2019 he was an Opera Holland Park Young Artist performing the role of Silvano Un ballo in maschera.

For Welsh National Opera he collaborated on a project with asylum seekers creating a new work about their experiences, Stories of Hope and Home. The work was produced and performed on the main stage of the Birmingham Rep in July 2022, with further performances planned in Cardiff and elsewhere.

Samuel Oram is an experienced singing teacher, and workshop leader in a variety of school and outreach settings. He has worked closely with Welsh National Opera on education programmes, and as workshop leader for Opera Holland Park’s Inspire Team.

“In this role (Marcello) Sam Oram proved to have one of the richest baritone voices I have heard in a young singer – clearly someone to watch!” La Bohème/Opera Holloway, London Theatre 1, September 2019

“Samuel Oram impressed in the small but important role of Cristiano the sailor in the scene with Madame Arvidson.” Un ballo in maschera/Opera Holland Park, Planet Hugill, June 2019 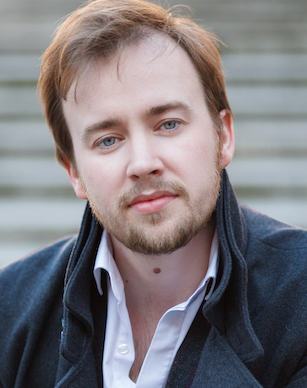